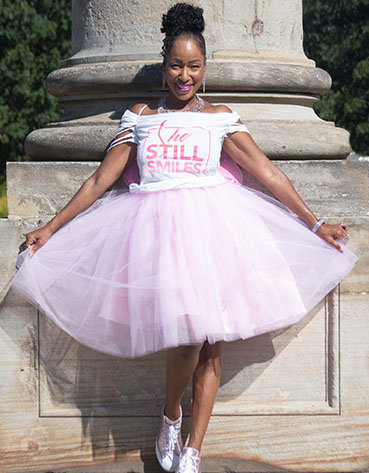 In April 2009 I was adamant during my annual OBGYN visit, she was a new provider who admonished her assistant for listening to my complaints too long. She dismissed my concerns about the worrisome discharge soiling my bras blaming my dense breast and age. Both breasts ached so badly I was popping painkillers just to ease the pain. I suffered until the Fall of 2009, after a manicure the discharge actually infected my fingers. I rushed to my Primary Care provider, Dr. Bone who sent me to the Radiology Center for my first mammogram that day. The technicians face said it all. The doctor entered, ordered an ultrasound as I complained about the possibility of missing my National Children’s Museum board meeting. An hour later he said “ I can’t say for sure that you have cancer, but I definitely won’t say is that you don’t.”. I sat in their parking lot sobbing uncontrollably. There was no history of breast cancer in my family. I called the only person I knew that had the horrific disease. Lori Smith, I’d watched her battle gallantly. She calmed me, prayed for me and educated me on my journey to come. I thought about my children Taylor and Aaron who had been through enough tragedy for their young lives. We’d buried Alex, their brother- my 12 year old son just 2 years before, tragically killed on the construction site of the National Harbor. I was newly divorced and we all were still very heartbroken. I screamed “Dear GOD, WHERE IS YOUR MERCY?!, I am your faithful daughter!!!” I know HE heard me in the Heavens. It was loud, it was ugly, it was desperate, I reminded HIM of HIS word-THE WORD.

HE blessed me with a renowned oncologist surgeon, a talented sister, Dr. Regina Hampton of Doctors Community Hospital who uttered my final diagnosis with such enthusiasm I almost missed it, Stage 2-t3, she was so optimistic it was contagious! Veterans Day 2009 and it seemed I’d been called to battle, days later the National Health Advisory Board made a controversial recommendation discouraging women from having mammograms before the age 45. They claimed rates of misdiagnosis and over exposure to radiation. This hit the media and spread like wildfire. It sounded like a big insurance companies rouse. If I listened to this, I’d be dead by then, furious I took to the street and joined the picket line in front of their Rockville, MD headquarters, the only woman of color there to represent our outrage. There I was interviewed by NBC News Channel 4 who seemed impressed by my vigilance, I was blessed when their producers decided to chronicle my battle with breast cancer live on air to inspire others towards early detection. I had a partial mastectomy removing the center core of my left breast then immediately underwent reconstructive surgery by the qualified hands of sister, Dr. Nia Banks but my phone rang 8 days later post surgery pathology reports showed I still have cancer! that very morning I’d won an all expenses trip for two to the Cayman Islands from local radio station WPGC-FM. Dr. Hampton gave me 2 weeks to be back on the surgeons table, she believed this type of cancer to be aggressive in women of color and wanted no delay.

Ironically in 2008 , my best friend Clovia and I organized Richmond, VA 1st annual Breast Cancer Survivor’s Gala, a pink-carpet treating them to a fine brunch at restaurant. Politicians, business leaders and locals came with donations in hand and packed the house, 100% proceeds donated to the American Cancer Society Making Strides Walk. These women AND MEN survivors were celebrated. We raised 2300 dollars in 3 hours at this event. The next year I’d be too ill to attend myself. My sister Nikki and Clovia held my hand until they rolled me away December 18th, 2009, Alex’s birthday, during the worst snowstorm of the century. I endured 8 weeks of radiation, lost 20 lbs and was severely fatigued. I CRIED, yet I never lost hope. I would not have chemo so I could continue to pursue my passion- mentoring youth. I went on with directing ALBCSF, workshops and public speaking engagements. I organized a mentoring hotline for newly diagnosed breast cancer patients and their families, 9 years later we’ve help distribute over 35,000 dollars in donations across DMV. The all natural body cream my mom created 30 years ago ”7-SEEDS” which rendered my radiated breast burn free, became a profitable business supplying local surgeons and dozens of patients with remarkable results. In 2012, I was diagnosed with a mass, left breast. I’ve endured a total of 7 breast surgeries and yet I am triumphant. I have so much work to do for my kids, our youth, the community. December 2013, I received a full-page feature in ESSENCE magazine. I am living a colorful life composing an awesome body of work. The blood from my wounds coagulates with ancestral courage and staunch determination. I PUT MY FAITH WHERE MY FEAR IS....I REROUTE.. .THEN GO... ONWARD!!

“Fight the good fight of Faith, lay hold on eternal life, to which you were called and have confessed the good confession in the presence of many witnesses." - I Timothy 6:12

In keeping with our goal to help as many survivors as we financially can, we have created a simplified criteria for the identification and selection of gift and care package recipients. The selection criteria is as follows:

To be considered to receive a gift or care package from She Still Smiles, a breast cancer survivor shall:

The selection process shall be as follows: